PNM made significant investments in renewable energy since 2003, even before New Mexico had a Renewable Portfolio Standard (RPS).

The New Mexico Wind Energy Center was one of the world's largest wind farms when it went online October 1, 2003. 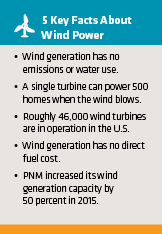 It is located 170 miles southeast of Albuquerque and 20 miles northeast of Fort Sumner. Power production does not require water, produce emissions or generate solid waste.

The wind center consists of 136 turbines, each standing 210 feet tall. The facility can produce up to 200 megawatts of power, or enough electricity to power 73,000 average-sized New Mexico residences.

In May 2003, PNM was awarded the 2003 Utility Leadership Award from the American Wind Energy Association, in recognition of PNM commitment to renewable energy and its contribution to the advancement of wind energy.

Starting January 1, 2015, PNM began purchasing the energy output from the 102-megawatt Red Mesa Wind Energy Center, which is located about 50 miles west of Albuquerque and came online in 2010. The center's 64 turbines produce the energy used by 29,000 average residences.

PNM plans to add the following resources in the near future: