A Commitment to Reliable, Affordable, and Environmentally Responsible Power

PNM has ownership interests in a number of different power generation facilities that provide energy to its New Mexico customers. Because PNM is a regulated electric utility with nearly all of its generation resources dedicated to serving customers in its regulated jurisdictions, it does not have exposure to stranded assets based on the fluctuation of market prices for its products that other energy companies (such as oil and gas producers) may experience. PNM has exposure to impairments from stranded generation assets only if it is not permitted by the New Mexico Public Regulation Commission (NMPRC) to recover its investments. Under certain circumstances, such as described in Note 1 below, the company may agree to forego partial recovery of its investments in a negotiated regulatory settlement. Commissions, such as the NMPRC, approve both the addition of new generation resources to serve customers and the timeframe which those resources should serve customers and be recovered through retail rates, essentially approving both the assets and the associated useful life. Should a commission mandate the stranding of an existing asset without allowing a utility to recover its investment, the utility has the opportunity to appeal that decision to a higher governing body such as the state supreme court.

The table below provides a list of PNM-owned generation resources.

Our ownership interests in coal-fired power plants totaled 983 MW at the end of 2017, but fell to 762 MW in 2018. PNM has proposed reducing coal-fired resources further, such that by 2023, it would only own 200 MW, and be coal-free in 2032. For more information on our future generation portfolio, see the Resource Planning section below or Integrated Resource Plan at PNM.com/irp. 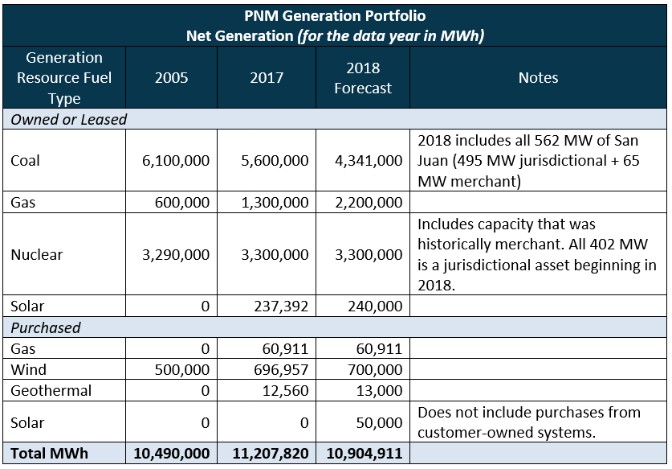 PNM has worked to significantly reduce emissions over the past 15 years through the installation of additional pollution control technologies Generating Generating Station (SJGS), the increased use of renewable energy, and the use of natural gas, and the development of extensive energy efficiency and conservation programs for customers. The efforts at SJGS include:

Much of the proposed reductions in emissions, including carbon dioxide emissions, has its origins in a forward-looking plan PNM developed with the State of New Mexico and the Environmental Protection Agency (EPA) for SJGS. This plan was developed to address federal Regional Haze regulations under the Clean Air Act but has significant impact in reducing carbon dioxide emissions and the added benefit of significant reductions in water use. Currently, there is no rule in effect to regulate carbon dioxide emissions from existing fossil-fueled power plants. EPA issued a Notice of Proposed Rulemaking in 2017 to repeal the Clean Power Plan, which would have regulated carbon dioxide emissions by requiring power generators to change their energy portfolios (shifting generation from coal to gas, and from fossil fuels to renewable energy). The Clean Power Plan never went into effect; it was stayed by the U.S. Supreme Court as litigation proceeded. In a separate but related action, EPA proposed a rule in August 2018, informally known as the Affordable Clean Energy rule, which would suggest “candidate technologies” for states to require on existing fossil-fueled plants, which could reduce carbon dioxide emissions. After the rule is finalized, each state would submit a plan to EPA for power plants in its jurisdiction. Regardless of future regulation or legislation to reduce greenhouse gas emissions from existing fossil-fueled power plants, PNM has made major strides in reducing its emissions, and expects to continue this path. 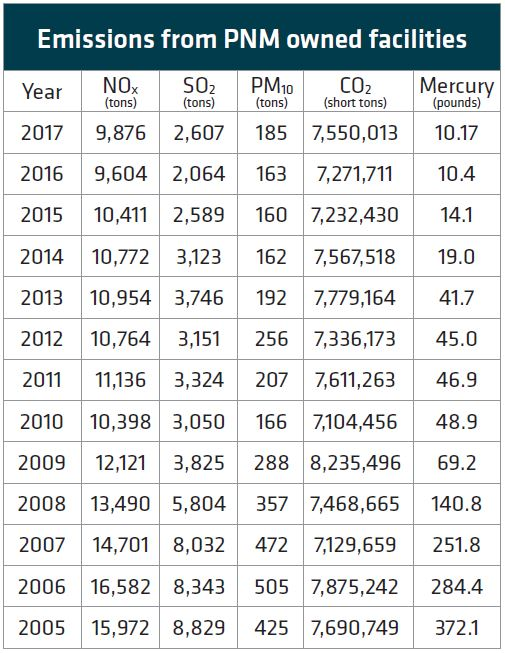 PNM conducts research and planning activities using a number of different avenues including preparing an Integrated Resource Plan (IRP) once every three years. The IRP identifies portfolios of resources to supply PNM's customers' energy needs over a 20-year period with a specific action plan for the next four years. The IRP is a public process that includes numerous meetings and public inputs to generate the plan. The filing requirements specify that for resources whose costs and services are equivalent PNM should prefer resources that minimize environmental impacts. The IRP results in an investment roadmap for the Company and documents the actions required to achieve the plan's objectives over the next four years.

On July 3, 2017, PNM filed the 2017 IRP with the New Mexico Public Regulation Commission. Analysis in the 2017 IRP shows a most cost effective portfolio that would result in the following changes to PNM's generation resources:

The 2017 IRP presented resource portfolio plans for scenarios that assumed SJGS will operate beyond the end of the current coal supply agreement that runs through June 30, 2022 and for scenarios that assumed SJGS will cease operations after mid-2022. The 2017 IRP data shows that retiring SJGS in 2022 would provide long-term cost benefits to customers, including further significant reductions in carbon dioxide emissions and more clean energy options for customers. PNM plans to propose replacement power for SJGS Units 1 and 4 that include the use of cleaner fuels.

With the recommendations in the 2017 IRP, PNM is on track to reduce GHG emissions by 81% by the year 2032 and by 87% by 2040. The following figure provides the historic and projected carbon dioxide emissions for our owned generation and purchase power agreements.

The results of the 2017 IRP illustrate that energy needs are changing and replacing coal-fired generation with renewable energy and more flexible generators will save money for customers in the long run. The 2017 IRP is not a final determination of PNM's future generation portfolio. Retiring PNM's share of SJGS and exiting Four Corners would require approval by the NMPRC. 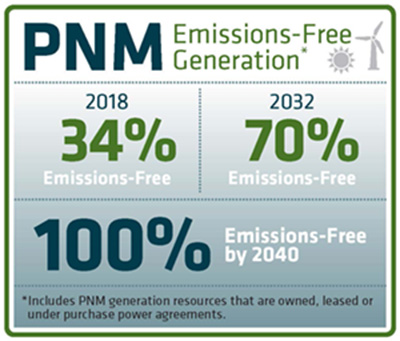 PNM is proud to be a participant in Palo Verde Nuclear Generating Station (Palo Verde), the largest nuclear power plant in the U.S., located near Phoenix, Arizona. Palo Verde is licensed and routinely inspected by the Nuclear Regulatory Commission (NRC). It is a three-unit, 3,810 MW generating station operated by Arizona Public Service Company that serves more than one million homes in the Southwest. It will provide about 33 percent of the power needs of PNM consumers in 2018.

View a presentation on Energy Storage

outlining the current state of the technology and potential benefits it plays in providing reliable, affordable and environmentally responsible electricity.