The many beautiful desert and mountain landscapes in New Mexico means that our state is home to hundreds of avian species. As population areas have expanded and the need to build more electricity infrastructure has increased, birds have adapted and now use electricity-related structures to roost, nest or find protection from weather events. Unfortunately birds and electricity don't always mix. While birds can sit on power lines and be safe, if they happen to touch energized conductors and/or grounded equipment, such as a transformer bank, they can be electrocuted. 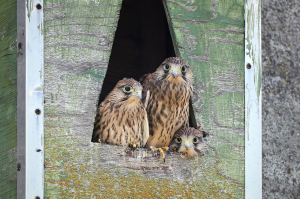 PNM takes its committment to the environment and efforts to protect New Mexico's wildlife very seriously. To deal with the growing problem of electricity-related bird deaths and outages caused by birds coming into contact with equipment, we created our Avian Protection Program in 2006. Efforts to bird guard PNM equipment and install avian safe structures have paid off. PNM offers educational programs and installs habitats on power poles to help in that effort.

On one line in Tijeras, N.M., there were 78 bird or animal-related incidents over several years. After bird guarding was put in place on the line, the number of incidents was reduced to only two the following year.

Not only has PNM committed to avian protection on its own system, but we have shared knowledge with other utilities to help them implement similar programs.  PNM is the founder and ongoing sponsor of the New Mexico Avian Protection Working Group, in conjunction with Hawks Aloft, New Mexico Game and Fish, the Rural Utility Service, and the U.S. Fish and Wildlife Service. The Group trains co-ops and other utilities throughout the Southwest on avian protection best practices.

PNM is a charter member of the Avian Power Line Interaction Committee (APLIC), a national organization of utility industry biologists and standards engineers, and the U.S. Fish and Wildlife Service. APLIC has developed and published Suggested Practices for Avian Protection on Power Lines, which reflects the state of the art in avian protection practices.