Albuquerque: PNM is receiving reports from business and residential customers that scammers claiming to be with PNM are threatening to disconnect electricity unless a payment is made. Nearly 550 scam reports from PNM customers have been received since October 26 and that number continues to grow.

PNM is working the Federal Bureau of Investigation (FBI) Internet Crime Complaint Center (IC3) because these fraudsters are using VoIP telecommunication phone lines to scam customers out of money, which is a federal crime. PNM and the FBI are asking New Mexico customers for help by reporting the details of any scammers that may have contacted them to the FBI so the agency can track and analyze them against similar scams and suspects. Reports can be made at www.ic3.gov. PNM is also asking customers to report the same information by calling 888-DIAL-PNM.

PNM customers throughout New Mexico are being targeted with a steep influx in the last 3-weeks. Scamming electric customers out of money by threatening to shut off their power is not new, and utilities across the country see it often. The scam has been known to come in various forms, including the following:

“Unfortunately, scammers continue to develop new and sophisticated ways to steal money from customers who work hard for their money,” said Shannon Jackson, spokesperson with PNM. “But there are things customers should keep in mind that can help them to recognize these scams and to protect themselves from falling victim to it.”

If customers ever feel like their safety is at risk, local law enforcement should be contacted immediately by calling 911. 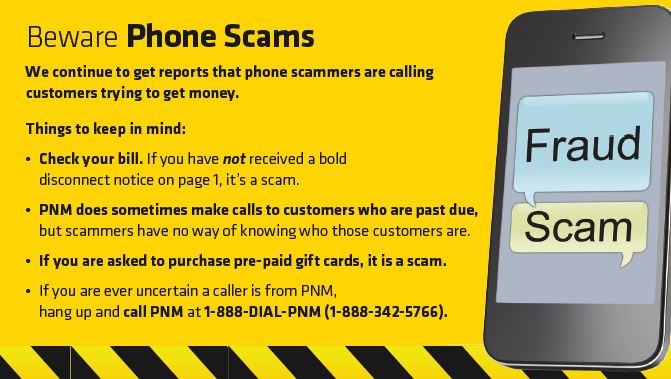